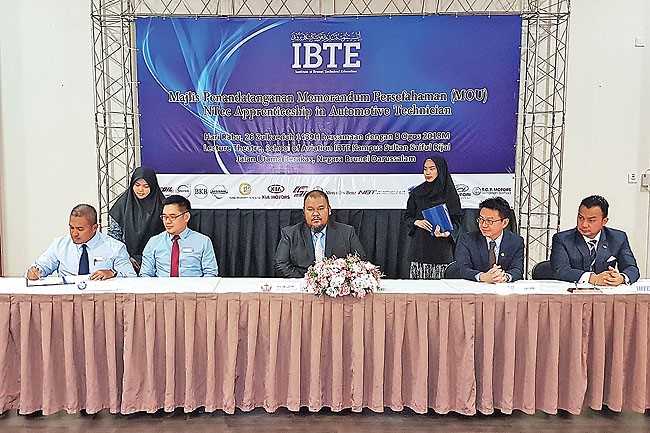 Employers nowadays give priority to people with the right attitude and commitment, he said.

He made these comments in his welcoming address at a ceremony when IBTE entered into an apprenticeship partnership with 13 companies with the signing of the Memorandum of Understanding (MoU) yesterday at the Lecture Theatre of the School of Aviation, IBTE Sultan Saiful Rijal Campus at Jalan Utama Berakas.

The apprenticeship programme aims to help foster a long term partnership between IBTE and the industry to help train students and develop their skills as technicians needed by the industry.

Dr Sheikh Lukman said the cooperation between IBTE and the relevant parties has helped in the development of the curriculum and bridged the gap in skills and expertise. The cooperation also presents students the opportunity to gain invaluable experience and training in terms of practical and theoretical aspects, he added.

He stressed that the relevant parties should prepare for the challenges in human resources in the 21st Century. IBTE has been successful in producing apprentices in various fields and the existing collaboration has been successful, he added.

With the current Dual Apprenticeship Scheme programme, it is hoped that the industry can assist in employment by providing guidance and the right platform, he said. Twenty-five students are enrolled under the NTec Apprenticeship in Automotive Technician programme at the IBTE Mechanical Campus. They will undergo an on-the-job training with the 13 companies.